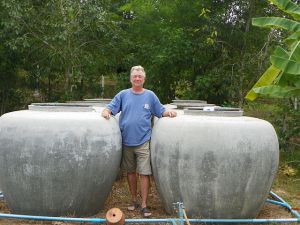 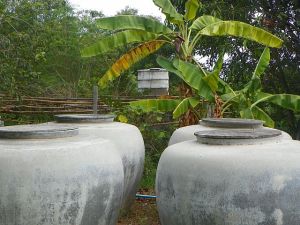 We had been in Bangkok for several weeks anticipating the possible floods again this year. The remnants of two typhoons have passed through adding to the monsoon rains, but they past to the south a bit and didn’t produce heavy flooding in this area.

We’re back at the farm again and it rains every night but this is the highlands and flooding isn’t a problem.

As I walk around I’ve started to notice the things around me in a new light. Before I didn’t give it much thought as I’ve become accustomed to odd things about life in Thailand. When I first came to Thailand I rode my motorcycle around and saw these giant pots beside every rural house. They fascinated me because I couldn’t decipher their use. I wanted to see what in the world they planted in these monster jugs. And then I wondered how the people moved them about. Silly me. Even though I didn’t know their purpose, I wanted one!

As it turns out, they are to catch rain water to carry the household through the dry season. Many places around the world have cisterns for this purpose but they are usually hidden from view.

Now in a more modern age many places in Thailand have local water supplies that are piped to each house, but the large Tuums are still kept because the water supply isn’t always reliable. And, I guess, how would one go about getting rid of them?

On the farm, we had a well drilled down 40 meters and built a water tower to store the water, but my all-knowing wife wanted more water for watering out plants in the dry season.

We purchased a number of these giant pots and they each cost less than $30 US—what a deal. I was excited but wondered how we would get them to higher ground. The tuums arrived and the men just lifted them off the truck, turned then on their side and rolled them. These pots are incredibly strong. We piped water from our water storage tank and they fill by gravity. We also irrigate from the tuums using gravity feed. We do have a pump but only use it during the driest of times to water trees a bit higher in elevation. We now have a total of around 4000 gallons of water to use as needed. We also use this storage to supplement our ponds to keep them from drying out. The dry season here last for six months or more.

For me these exotic things only add to the wonders of life in Thailand. If we ever return to the States I will certainly consider catching rain water for plants and lawn—think of the savings in the water bill.

I hope you enjoyed this post about a writer’s life in Thailand. 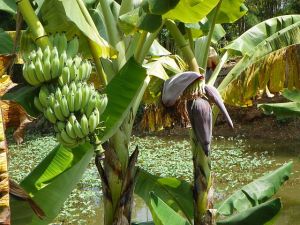 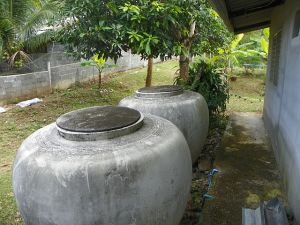 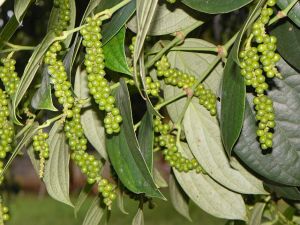 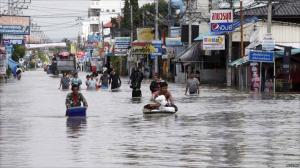 It's no fun living in water. 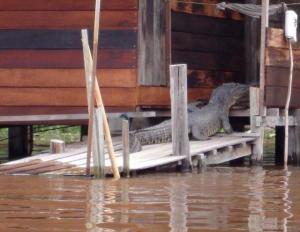 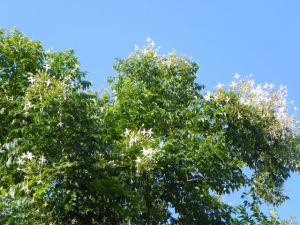 Flowering Pip tree outside my house- just a bit of beauty

This whining, complaining or whatever you’d like to call it to others is something new for me. I read a lot of very good blogs where the writer pores out their feelings and bad experiences and I admire them for it, but it’s not something I do well.

I’m tired of this flood and it’s beginning to get to me and I’m safe in the mountains. I really shouldn’t worry about possessions and I do try to put it in the back of my mind. Of course my wife is worried as well. Our house in Pathum Thani had survived so far. It’s right in the middle of some of the heavy flooding. Places like Klongs 1 through 8, Rangsit, Klong Luang and Lam Luk Ka are in the news every day and night.

We were there a day before the dike broke for Klong 5 and there were constant sirens and loudspeakers warning of what was coming. After a week of this we left to go back to the farm. My wife had our little house built 15 years ago and we’ve never had a problem with flooding. We’ve lived in it for the past 8 years.

We went to the farm and the waters came. We couldn’t get in touch with anyone and we were told all the roads were closed into the area. Now, I can take water damage, clean up an all the other things that go with flooding. But the ups and downs of hope and despair aren’t as easy. When our area becomes the track they play on TV between shows I start the worry over and over again. Mostly about our neighbors.

A few days ago my wife’s cousin made a trip to see our house. She lives a few miles away and the waters hadn’t reached her house. We learned that the small area where our house is was still out of the water. We were excited. Then two days ago she called and said her house was now flooded. We worried. Today my wife finally was able to get through to our next door neighbor. Water filled our street but it was not getting in our house. We had added dirt and footings to raise it 3 feet above the ground level when it was built. All but 1 house on our street was built that way. We were happy.

Last night the government put in emergency control of our area for the next two days. There was a new release of water from the north and no one is allowed into our area. We worry.

In Thailand the water gates to dams, canals and other flood control methods are controlled be the local government and the PM can only ask them not to release water or let it in. The local areas try to insure there will be enough water for planting and people during the dry season. Now, it seems, they hold the water until it gets too high and then release it all at once with no regard or pattern. There really needs to be federal control in these situations.

Thailand is also the largest breeder of crocodiles in the world and you guessed it—many of these farms have flooded and the crocs have escaped just to add to the fun. So now the giant lizards around our house may have some company.

Enough about my petty woes. Hundreds of thousands of people are suffering and it’s not going to stop for at least 6 more weeks. I really hurt for those people. The dry season has arrived here at the farm but it’s still raining in Bangkok. Please pray for the people of Southeast Asia. This is my last flood report—unless something really bad happens, lol—until we are able to return to our house. Next week you’ll read about the Writer who stayed with rubber tree farmers. Thank you for reading.

I’d like to add that most of the pictures I put up were not taken by me. Every time I was in the rushing waters my camera was either at home or I was concentrating on staying alive.

I was going to post a nice story about the rubber trees in Thailand , but instead I will tell you about what’s happening right now.

This is the rainy season in Thailand and it is normal for some low lying areas to flood for a few days. This year the rain won’t stop. I’ve never seen so many overcast days here. We only see the sun perhaps twice a week and then not for long. Most unusual. The rains normally come in the late afternoon or evening for a few hours and then it’s clear until they return. This year it just doesn’t seem to stop.

We have a little farm on the central plateau and don’t have to worry about floods except for the very intense rains. We also have a small two story house in Pathum Thani—near Bangkok. There are a series of klongs- canals- that protect a large area area, but this year there’s just too much rain all over the country and it’s heading for Bangkok via the Chao Phraya river- the main river of Thailand. Many areas of Bangkok are already flooded and it’s only going to get worse.

My wife and I have been caught in these floods on several occasions and it was scary to drive through water several feet deep and not knowing if there is a hole in the road. I always follow someone else but crossing small rivers that are higher than the bridge is unnerving.  All in all we are doing well and safe.

The really bad part is that there are areas where people are living in their houses that have been in deep water for three months. I feel so sorry for these people. Thai’s normally take on any situation with a smile but this year I have seen people crying for lack of knowing what to do—even government officials. Seeing a Thai cry is very unusual and it tears at my heart. They will come through this and be laughing when it’s over.

Another worrisome part is that in the Bangkok area we have been to a number of food outlets and there is no bottled water except for the small 1/2 liter bottles. Only the very poor drink water that doesn’t come from a bottle. I suspect people are hoarding it and the supplies will soon be there. We have a well at out farm so we will have drinking water and will make it available if needed.

The US has helped with relief by giving 3 million baht– $10,000. Not much help at all. China has given and offered large amounts of money and aid.

I wish I had some pictures to add to this post and will later on but I must tell you when I’m in 2 or three feet of fast moving water rushing across a road, my camera is the last thing I’m thinking of, lol. And it’s not just crossing a short span. There is water for long distances. Looks like driving on a lake or the ocean in some places.

I do pray everyday for these hard hit wonderful people and I hope you will add your prayers also.

For my friends and reader I want you to know that my wife and I are quiet safe. I am ready for the dry season!