I'm heading to see our house- behind me near the water tank. I'm so excited. 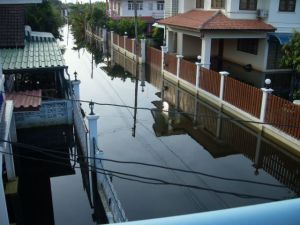 A view from our front balcony 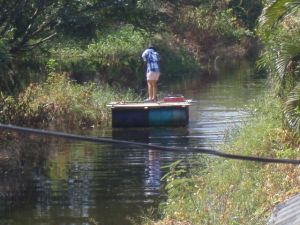 Our neightbor, Pit, gave us a ride back to dry land in homemade boat.

Our house- a view from, Pit's boat, We're going in to Bangkok

People living and parking anywhere the road is dry

A view of Don Muang Airport- Oldest airport for Bangkok

Here’s another post about the devastating floods of Thailand from a personal point of view. My wife and I had to return to our house to get paperwork for a Visa. We have a one year Visa but we are required to check in with immigration every 90 days because—well I really don’t know why but that’s the way it is. We also wanted to check on the condition of our house.

We left our farm in Pak Chong at 6:00am and had to take a van into Bangkok. I didn’t drive my truck because we had no idea of the conditions. The van driver knew every back road to avoid the floods- almost. We skirted the floods but did have to travel through a foot or two of water from time to time. We had to take the van to Bangkok but found we were passing close to our house on Klong 5 so the driver let us out.

We took a city bus to within ½ a mile from Klong 5 road. We had to wait from some kind soul in a pickup or larger truck to offer us a ride and were soon standing at the entrance to our road. Water was everywhere but we were there and off we went into the water. It wasn’t as bad I as I thought but it wasn’t clean water. The water had gone down about 1.5 feet from its highest point. We waded through waist deep water to find the water level was below the entrance of our house.

We had earlier reports from ‘eyewitnesses’ and they told us the water was three feet deep in the house. What we found was it had only been about 7 inches deep inside. It was very dirty but the power was still on and we had county water still working. I couldn’t believe it when I opened the refrigerator door and the light came on. And the ice was still cubed.

All in all we lost very little, but have a big clean up coming. The only thing I lost was my motorcycle. The engine was full on water and oil. I have a big rebuild job coming.

[The worst part of this is the water is not moving. It went down about one inch while we were there. The city of Bangkok is doing all it can to keep water out—and they aren’t succeeding. What they are doing is letting the water backup and settle outside the city. There are people and houses that have been in the nasty water for more than 3 months. This can’t all be blamed of the government but for the first three months it was every community for itself trying to save their little piece of land at the expense of the farmers and others. Industry has taken priority over people but the factories are flooded now. Allowing factories and housing to be built in the greenways and flood channels is a real problem that must be solved in the future.]

None of our neighbors were there but two women, in a house on the road behind, never left. One’s name is Pit and she was so happy to see us. She had made a raft out of 4, 55 gallon drums and offered to take us to the dry road when we were ready. I say hello to everyone and try to speak to our neighbors and it paid off in kindness.

We stayed 2 days on the second floor of our house while we cleaned as much as we could. That smell will take a very long time to leave the house and my mind.

Pit showed up early in the morning with her raft and we gave her what bottle water we had, packs of dry noodles and a few cokes to help her and her sister. She would accept no money. She will remain as a shining star in the misery of the flood.

We again had to wait for someone to offer us a ride across the water and then make our way to Bangkok. We didn’t have to wait long. A very nice man took us all the way to the main road and we started bartering to get a ride into the city. A very old red government bus stopped and the drive announced that the bus was going to where we wanted to go—Victory Monument. And the ride was free- provided by the city.

It took two hours to go about five miles to the toll way because only a few lanes were open. People were forced to park their cars and trucks on every piece of dry road.  Once on the toll way—which was also free to everyone—we passed over the terrible flooding almost to the center of Bangkok. We passed Don Muang Airport—the old airport, which is still used for many flight in and out of Thailand. The name means High Ground, but the floods had swamped the airport with aircraft left there.

Cars and trucks were parked everywhere and people were living on the elevated roadway. Report of looters kept many people near their property. Many people are still living in their flooded homes for this reason and they are suffering in the fetid water.

We were able to finally take care of our Visa paperwork and head back to the farm. It took over five hours—normally a 2 hour trip—to reach Pak Chong. We passed the main airport for Bangkok and the water is headed that way.

I hope all of you who read this little post will think about all the suffering that is going on in Thailand and really around the world. There are many people facing natural disasters that we never hear about.

We are safe and we are lucky and this has not changed my mind about Thailand or the wonderful people that live here. The smiles are returning.

I would like to add. I don’t mean to sound bitter about the government actions. We have met Military and Policemen and women who have extended every kindness to us outside Bangkok. Many are helping bring food to the people, get the old and injured to hospitals, and give rides in and out of the flood waters. Thai people do care for one another and it is good to see.

Also these floods are only affected the central flood plains and most of Thailand is free from the flood waters. Come to Thailand for the time of your lives!

8 responses to “Flooding in Thailand- Going to Our House”